Disegno Magazine No. 12 is available now. The launch of Disegno #12 coincides with the magazine’s fifth birthday, that will be celebrated at a special event in London.

Disegno Magazine No. 12 is designed by Disegno’s creative directors, Annahita Kamali and Florian Böhm of Studio AKFB, and features a series of reportages, essays, reviews and conversations.

Highlights in the issue include a photoessay on OMA’s Fondaco dei Tedeschi, Venice’s first department store; a conversation between Roksanda Ilinčić and David Adjaye on how their respective fields intersect; a travelogue from Tehran examining the city’s post-sanctions design community; an insider’s report on the UNESCO World Heritage List, illuminated by the case studies of Le Corbusier and Frank Lloyd Wright; and an ode to styrene written by Raymond Queneau.

To celebrate five years of Disegno, the magazine approached nine designers to participate in a special project that re-imagines the act of toasting for contemporary society. The resultant rituals blend function, symbolism, and social critique, and are featured in the pages of Disegno #12. 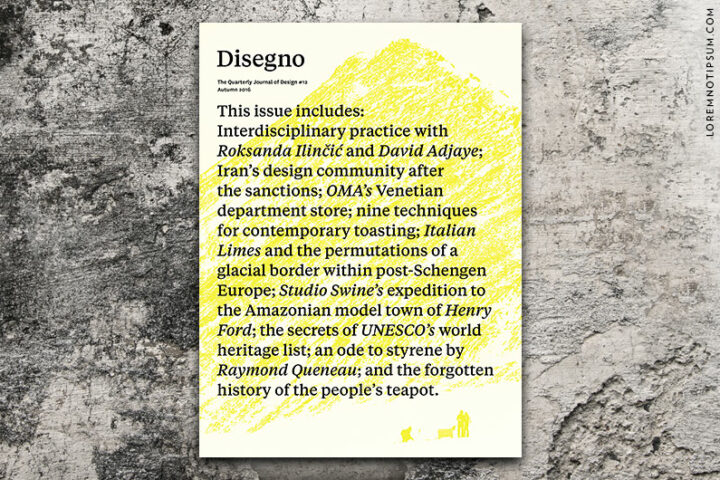