Mundial Magazine Issue 15 is out now. After the madness of 21 World Cup covers, we thought that it was time to do something a bit different for this issue, so we slid into Héctor Bellerín’s DMs on Instagram to see if he fancied being on the cover and, well, he said yes.

Mundial Magazine Issue 15 is out now. Hello there, football friends. After the madness of 21 World Cup covers, we thought that it was time to do something a bit different for this issue, so we slid into Héctor Bellerín’s DMs on Instagram to see if he fancied being on the cover and, well, he said yes. We then spent four hours with him in a studio in London and found a genuinely lovely bloke who had time for everyone, was fully engaged in the shoot and even laughed at some of our jokes. He talked about shaping his game somewhere between Barcelona and North London, not sleeping after a bad result, why fashion runs in the family, investing in tech, watching Ronaldinho, working with Steve Bould and Arsène Wenger and why he thinks young footballers should feel comfortable to express themselves off the pitch.

Elsewhere, the issue is absolutely rammed with global footy magic. We went to Brazil to watch the Grand bloody Finale of Neymar’s Final 5, walked the ancient streets and dusty pitches of Palermo to look at the importance of the game amongst street kids and immigrants, popped down to West London to see how one non-league club came back from despair through community spirit, went north to Chester to report on a family affair, and there’s a belting piece on football’s greatest con man.

Of course, there is also thirty-odd pages of nostalgia, fiction, tracksuits, weird things off the internet, and niche podcasts up front, along with a load of beautiful people in beautiful clothes knocking about at the end of the mag.

Mundial is a quarterly world football/lifestyle publication. It talks about all the bits of football that you still like. Travel, clothes, haircuts, big, old stadiums and everything else that isn’t a heat-map or pass completion stat.

Originally launched as a one-off to celebrate the 2014 World Cup in Brazil, MUNDIAL is now a quarterly football lifestyle magazine that loads of you seem to really like. Others don’t. We get it. It’s fine. We like fans, kits, photography, boots, nostalgia, goals, illustrations, pubs, and words. Loads of words. Perhaps too many. 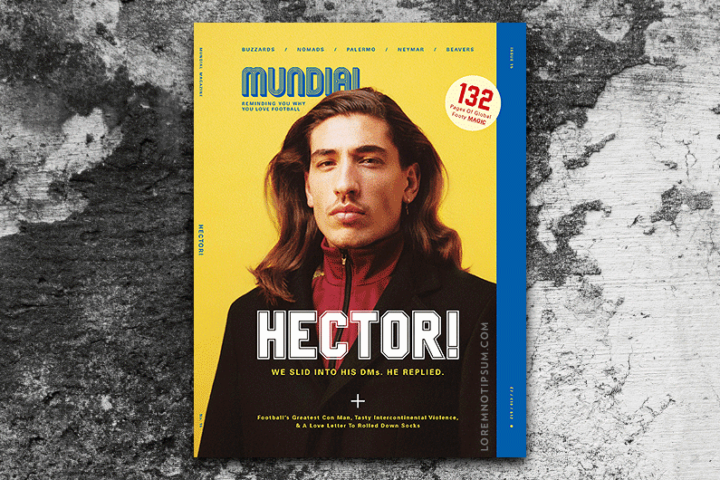