Berlin Quarterly Issue 9 is out now. Berlin Quarterly’s Ninth Issue opens with a reportage from Leonard George, presenting a history of paganism and mystical rites in ancient Syria. It is paired with abstract paintings by Hilma af Klint, a renowned artist as well as a mystic, painting the images that appeared to her through séances.

Berlin Quarterly Issue 9 is out now. Berlin Quarterly’s Ninth Issue opens with a reportage from Leonard George, presenting a history of paganism and mystical rites in ancient Syria. It is paired with abstract paintings by Hilma af Klint, a renowned artist as well as a mystic, painting the images that appeared to her through séances.

Three selections of poetry feature a variety of distinguished poets: Robert Hass, the former US poet laureate, appears in conversation with Berlin Quarterly’s poetry editor Ezequiel Zaidenwerg, alongside some of Hass’ most celebrated works, and a selection of never before published poems. Xi Chuan, one of China’s most revered poets, is presented both in Chinese and in translation, with the exquisite prose poems he is best known for. Finally, Ricardo Domeneck presents a selection of Brazil’s leading women poets: Marília Garcia, Angélica Freitas, and Adelaide Ivánova, three central figures in the contemporary Brazilian poetry scene.

The issue includes a pair of short stories. The late Taeko Kōno, considered a monumental 20th century feminist author in Japan, writes of a young woman preparing to meet her death. Daryl Qilin Yam, a contemporary Singaporean writer, explores the relationship between an uncle and niece.

Our photo portfolio features Todd Hido with his series Homes at Night, capturing nocturnal portraits of American suburbs, from California to New York.

Two pieces of nonfiction are included in the issue: renowned poet Mary Ruefle reflects on her well-meaning but fraught relationship with a homeless man who lives in her neighbourhood; and Kate Zambreno explores the American Civil War era photographs thought to capture the images of ghosts, as well as the role of photography in her own family history.

Berlin Quarterly is a European review of long form journalism, literature and the Arts published four times a year. It’s a new cultural journal with global perspective. Combining in-depth reportage, literature and visual culture, Berlin Quarterly was founded in 2013 by publisher James Guerin, and is headed by Milanese editor Cesare Alemanni. Notable contributors who have previously been published in e New Yorker, the Observer, New Statesman, Die Zeit, Aperture, and Frieze, among others. The magazine combines both historical and contemporary visual and written content. Visually striking design, including specially commissioned, full-bleed photography and illustration. The publication aims to bring you insightful and inquiring reportage and stories from around the globe. With a starting point of Berlin we look towards the rest of the world for inspiration beyond the German capital.

Insight An Interview with Robert Hass by Ezequiel Zaidenwerg 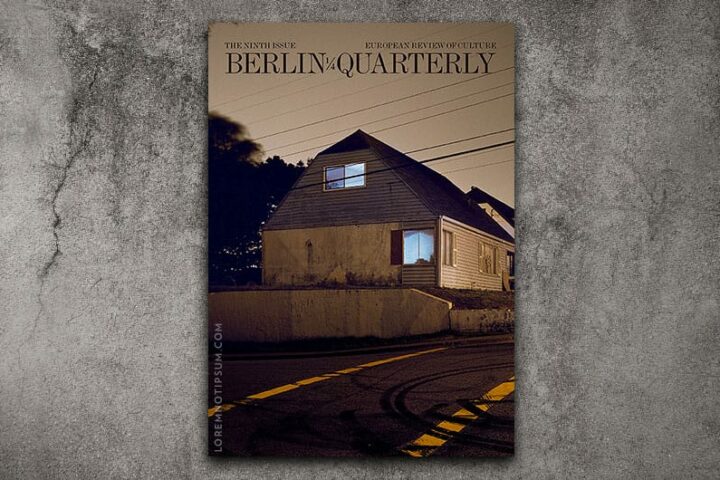