Dazed & Confused magazine celebrates the 25th Anniversary Issue. Marking 25 years of Dazed as a leading independent force, the autumn/winter 2016 issue celebrates the creatives we feel are truly radical in print.

In our biggest-ever issue, we invite past fashion directors to lens their ultimate cover star, host impossible conversations between cultural agenda-setters, and pay tribute to the editors and Dazed alumni that, from 1991 to today, have always been just a bunch of weirdos at heart. Going way beyond a mere tribute to the last 25 years, this is our ultimate fantasy issue. Happy birthday, Dazed!

Gigi Hadid: Marking the reunion of Dazed co-founder Rankin and its first fashion director Katie Grand, the girl-gen phenomenon takes over Dazed’s Old Street office in this special shoot – with an interview by Lila Moss Hack and Stella Jones

FKA twigs: Captured by Ryan McGinley and styled by Karen Langley in a dreamlike shoot, the pop pathfinder discusses self-empowerment and the power of dance with kindred spirit and Prince muse Damaris Lewis

Willow Smith: In a special bringing together two fearless voices of youth culture, Amandla Stenberg interviews her friend to celebrate Smith’s Chanel ambassadorship, talking gender fluidity and inspiring girls to uplift themselves alongside a shoot by Ben Toms in a Technicolor dream world

Jean Campbell: British model-of-the-moment Jean Campbell blows up balloons and puts on her party hat for our 25th birthday for a Burberry special in photographer Roe Ethridge’s signature off-kilter style

Marilyn Manson: The all-American nightmare tells us why he can’t help getting a bloodlust, starring in a Club Kids retrospective by Terry Richardson and former Dazed creative director Nicola Formichetti

Inside the issue, Dazed friends and family from Donatella Versace to Jazz Jennings, Karl Lagerfeld and Jake Chapman send us handwritten birthday notes; we turn the lens on the magazine’s teenage fans in a special UK readers shoot; and Dazed image-makers past and present submit a single photo to outline their vision of the future in a special photographic portfolio.

Elsewhere, RuPaul and Dolly Parton talk hair, happiness and what’s in their hearts in a hilarious head-to-head; model misfit Molly Bair is an 18th-century punk in a Roe Ethridge-lensed Comme des Garçons special; Julia Cummings opens up on her punk influences and proudest moments; and Abra describes the journey that gave her a new assertive energy in an after-dark Balmain special.

Dazed is a 100% independent British fashion and culture magazine, with a reputation for ground-breaking photography and agenda setting editorial, founded by Jefferson Hack and photographer Rankin in 1992. 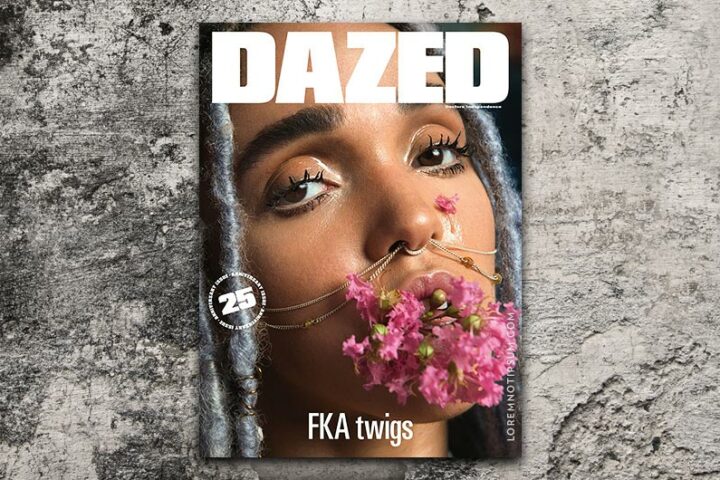