She Shoots Film Magazine Issue 2 is out now. She Shoots Film, Issue 2, MOTHER, contains work and words by women who have approached the theme of MOTHER from thoughtful and multi-layered angles. It features intense and personal narratives that are both written and visual.

She Shoots Film Magazine Issue 2 is available now on loremnotipsum.com. She Shoots Film, Issue 2, MOTHER, contains work and words by women who have approached the theme of MOTHER from thoughtful and multi-layered angles. It features intense and personal narratives that are both written and visual.

My start to motherhood was fraught with the extremities of madly falling in love and experiencing trauma within moments of each other. The birthing experience was not what I had expected, and from there on, I would wear my vulnerability as a layer just below my esh. Motherhood changed me. Over time, I would nd strength in this vulnerability and this enabled me to nd my own voice, to do things I never would have dreamed of doing or being before becoming a mother. One of those things was starting the She Shoots Film print publication.

Working on MOTHER has been a privilege. The thematic idea for the issue was conceived earlier this year and as the womb of this issue grew steadily and in directions I could not have anticipated, I realised that the beautiful heaviness of it sat inside me at all times. And just like the later stages of my pregnancy, it brought with it restlessness, emotional intoxication, and a yearning to meet. A desire to see it, touch it, breathe it and get to know it.

This issue presented us with some phenomenal artists who do not look away. Artists who have looked mother straight in the eye. Artists who have shared their lives with us, providing us with photographs and writings that are lled with the vicissitudes of life. The work and words are not afraid to go there, to touch pain, sadness, vulnerability, unease, fear of loss, risk and love. It is this gritty realness that makes you want to jump into every page. To join them. To know them.

We think of mothers as all powerful, or that they’re this, or they’re that. Whatever ‘that’ may be. Often we think they’re not fallible, while at other times, we identify them as casualties of a world that is still marred by patriarchal underpinnings. In this issue, you’ll see and read of determination, strength, softness, tiredness, a tricycle and a van, tumours and scars, womenpriests, questions, questions, questions, trauma, and history. You’ll see and read all these things and so much more. Because the theme of mother cannot be contained.

This issue transcends stereotypes of omnipotence or victimhood. It weaves through photographs and words, pushing its feelings o the paper and into life. You’ll gain a glimpse into the strength of diversity in the experiences and you’ll discover strength in the women. The woman photographer. The woman writer. The woman editor. The woman interviewer. The woman designer. The woman publisher.

Strength in the women.

MOTHER is a living breathing record of women’s experiences.
An enormous emotional thank you to the team, artists, writers, sponsors, collaborators and community for continuing to be with us! I want to acknowledge that your belief in She Shoots Film has made the di erence between having an idea and realising it.

We share this issue with immense pride – here’s to the MOTHER of all issues!

She Shoots Film is an independent publication that encourages, supports and draws attention to emerging and seasoned film photographers that make with a woman’s eye. The magazine started originally as a project on Indiegogo.com. The magazine features an incredible selection of full colour and B&W images from 29 female artists, four interviews and two essays. The first issue was limited to 500 copies worldwide. The magazine is an amazing film photography magazine from Australia made by women which makes women’s experiences visible. 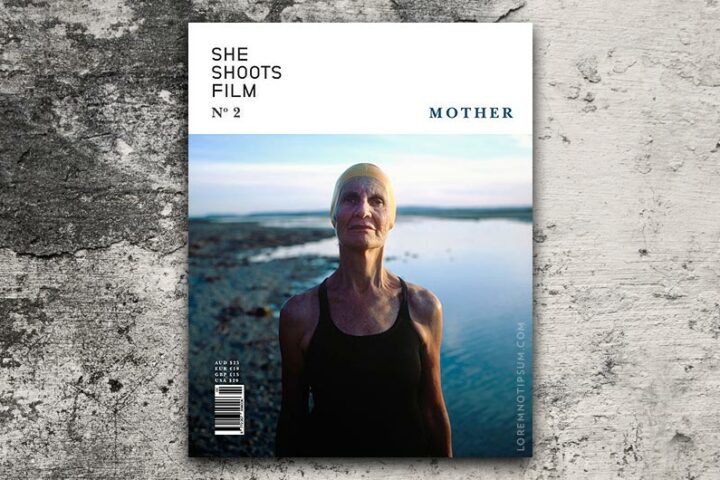