Another Man Issue 30 is available now on loremnotipsum.com.

Guest editor Jo-Ann Furniss introduces the Summer/Autumn 2020 ‘High Art Pop Culture’ of Another Man. I hate editor’s letters, so this isn’t one. Instead, it’s sort of an explanation as to why this issue exists in the way it does.

This issue was done for my great, sharp-as-a-knife and supremely talented friend, Alister Mackie – Another Man really is his magazine. It is the 15-year anniversary of the publication Alister instigated, so it’s all his fault.

It mainly features people I have worked with, interviewed and known over the years, many of whom are my friends and most of whom are my great heroes – they are the reason I work in magazines and the fashion industry in the first place. All of them I think also say something about the here and now: the 20s. They are all icons of High Art Pop Culture. There are only a few that I haven’t met, but I have been obsessing over since I was a teenager. One of them is Cecil Beaton. My other great photographic hero and obsession, Don McCullin, I’ve had the privilege to know for a number of years. This is one of the extremely rare occasions he has allowed his war photography to appear in such a context – he’s an incredible man and, in my opinion, the world’s greatest living photographer.

It is the image-making process more than anything else that I am preoccupied by. I’ve been very lucky to work with incredible photographers and stylists over the years, a few of whom are here besides Don, namely Alasdair McLellan – my closest working relationship – here photographing Jake Gyllenhaal for the cover and Blondey McCoy in Prada. Then there are ‘the Belgiques’ Willy Vanderperre and Olivier Rizzo, with a shoot that sums up their personal, special fashion history. And there is the brilliant Mario Sorrenti – there was really nobody else who would be able to capture Sterling Ruby’s world the way it should be – and Sterling himself, one of the great artists, here also doing styling duty and dressing his lovely team in his designs. I am so glad to know all of them.

There are other people who are responsible for my obsession with imagery, namely Peter Saville – who has defined my taste through what he does probably more than anybody else. And then there’s Bryan Ferry, one of the few I haven’t met, but whose album covers and music live in my head. Both of them lead to Richard Hamilton – another great artistic hero.

The publication mixes credible modern Icons with art, music, high impact fashion photography and strong opinionated writing by key cultural voices. A magazine for men who like their lifestyle rocked with passion and intelligence, luxury and a sense of adventure. Working with some of the most influential names in fashion and culture, its impressive cast of contributors includes not only iconic names in fashion photography and styling but also heavyweight international writers and exclusive celebrity contributors.  Another Man is for intelligent men who want a definitive guide to fashion, luxury and culture, packaged with great writing and iconic design.

The magazine is a publication from the UK and published bi-annually. In 2005 the magazine was launched to cater to an expanding menswear market and resurgence of creativity in men’s fashion. Essays and interviews with figures like JG Ballard, Richard Prince and Tom Waits alongside pioneering fashion made it the first magazine for men that combined intelligence, luxury and a sense of adventure. The Another Man magazine is part of independent publishing company Dazed Media, alongside Dazed and Dazed Digital. 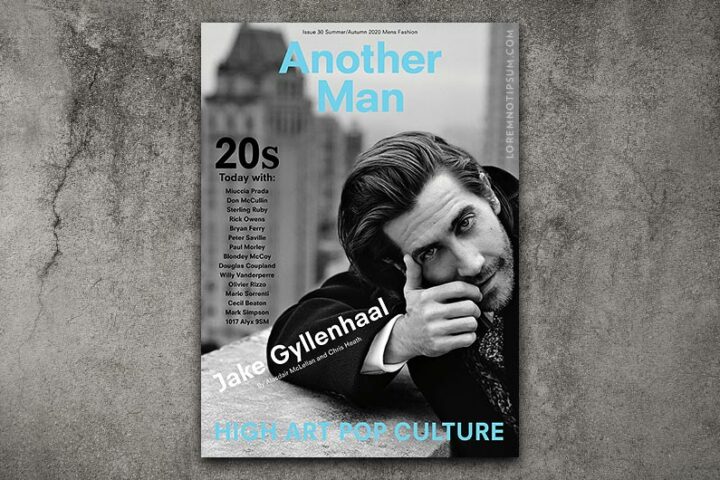