Different covers available. Will be shipped as parcel due to size and weight.

Atmos Magazine Volume 3 (Flourish/Collapse) is available now on loremnotipsum.com. Nature is a delicate balance of expansion and collapse, flourish and famine, growth and decay. Have human beings permanently disrupted this cycle, throwing the wheel off its axis, or are we just paving way for the next species to thrive? Is it still possible for us to return to a point of flourishing without collapse? Explore these questions with the Extinction Rebellion, the women warriors of the Amazon, and more of our heroes on the frontlines of conservation. Featuring contributions from Sylvia Earle, Elizabeth L. Cline, Ben Toms, Sam Rock, Stefanie Moshammer, Liliana Merizalde, Kristin-Lee Moolman, Gareth McConnell, Pieter Hugo, Simon Armitage, and more.

In “The Amazon Is a Woman,” Brazilian journalist Eliane Brum paints a clear portrait of how the violence committed against the rainforest is no different than the violence committed against the indigenous peoples who are risking their lives to defend it—the story of the forest is their story. “Rebel Yell” tells the tale of another band of warriors—the members of Extinction Rebellion and their Red Rebel Brigade— who have taken the threat of annihilation and transformed it into a movement of hope, beautifully captured by photographer Ben Toms.

At the heart of the issue are the twenty-first century’s “Stewards of the Wild,” a collection of incredible individuals and organizations on the frontlines of conservation, including diving legend Sylvia Earle, reforestation expert Akira Miyawaki, and Thomas Hildebrandt, the doctor working to save the northern white rhinos from extinction. The last two of these creatures in existence, Fatu and Najin, were lensed by photographer Sam Rock at their home of Ol Pejeta Conservancy, specially for this issue.

The remaining pages include a line of inquiry from The Conscious Closet author Elizabeth L. Cline about the future of fashion (“Reaping and Sewing”), a poetic exploration of personal loss by the UK’s poet laureate Simon Hermitage (“Hooked Up to the Morphine”), an exploration in space archaeology from the Harvard professor who coined the term (“Is Anybody Out There?”) and lessons from a death expert (“Living Like a Death Doula”). In “Two Futures,” Paris Climate Agreement authors Christiana Figueres and Tom Rivett-Carnac present two potential outcomes for our future, as explored in their new book.

Alongside these stories, Atmos asked nine artists—including Stefanie Moshammer, Gareth McConnell, Kristin-Lee Moolman, Pieter Hugo, and more—to interpret the theme of Flourish/Collapse through their eyes. The result is a journey along the axis of creation that spans from the teeming forests of New Zealand to the snowy expanses of Iceland to the all-but-barren deserts of the Atacama, telling stories that deal with the nature of proliferation and putrescence, abundance and absence, life and death—and the places where these forces meet.

“As a species, limitless growth seems to be all we have valued for so long,” says Atmos editor-in-chief William Defebaugh. “But nature has limits, limits that we are testing. We have been blindly walking the line between expansion and collapse, and never has it been more clearly illuminated how thin that line is. This year, with the snap of a finger, nature has shown us how quickly she can crumble our kingdom of comfort. At every turn, she teaches us the importance of balance. It is time we finally listened.”

Atmos Magazine is a biannual climate and culture magazine that tells stories about the environment through an art lens, curated by a global ecosystem of adventurers, creatives, and journalists, including Jamie Hawkesworth, Behrouz Boochani, Yoko Ono, ANOHNI, Ryan McGinley, and more. Through innovative design, in-depth storytelling, and impactful imagery, its goal is to elevate our collective consciousness surrounding sustainability and the future of our planet. 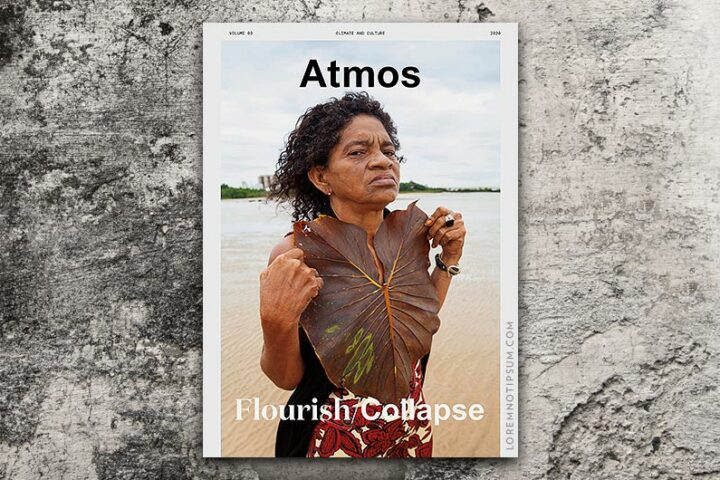