Avaunt Magazine Issue 3 is available now at LOREM (not Ipsum). For this issue (our first birthday no less!) our hope is that the words and pictures that follow might encourage you to aim just a little higher when you’re eyeing the fences you’d like to jump.

Avaunt Magazine Issue 3 is available now at LOREM (not Ipsum). For this issue (our first birthday no less!) our hope is that the words and pictures that follow might encourage you to aim just a little higher when you’re eyeing the fences you’d like to jump.

“When you start an expedition, you feel that everything is flat; everything is white all the way to the horizon. Your relationship to the environment is developing, and eventually you see that it’s not white, it’s variations of white, it’s a bit greenish, reddish; and the surface is not flat either…” So remarked to Avaunt the deep-thinking, alarmingly accomplished and disarmingly candid Norwegian explorer, Erling Kagge. The comment is compelling because, beneath the whizz-bang spectacle of his record-breaking achievements, we see the development of nuanced understanding – of perceiving one’s world more fully – that endeavour brings with it. This is what we are interested in at Avaunt: using adventure and innovation to see beyond the normal, to journey into the uncharted – pursuing discovery itself, rather than, necessarily, a fixed outcome or destination.

And despite our admiration for Kagge, we are far from being all about Scandinavian alpha-male explorer archetypes. As we go to print in a week when an all-woman Royal Brunei flight crew landed their Boeing 787 Dreamliner in Saudi Arabia for the first time (a country where they would be banned from driving), we are proud that Avaunt is documenting and celebrating an extraordinary range of sorely lesser-known female pioneers. From the young athletes at Budapest’s Honved Fencing Club (until as late as 2004 only men were permitted to compete in the sabre discipline of the Olympic sport), to Tara Isabella Burton’s profile of the itinerant and inspirational Devi Asmadiredja, who has forged an astonishing life in a remote part of the Caucasus mountains, we see women pushing boundaries further then ever.

On another note, you may notice the slightly smaller format: we loved the sheer acreage of 2015’s two issues, but we did get the impression from time to time that it was rather too big to, err, get in one’s bag. If you have any feedback for us – on size, or on content – we’re all ears at info@avauntmagazine.com.

Avaunt will be an inspirational, beautifully produced biannually lifestyle magazine that references early National Geographic and more recent titles such as Wired and The New York Times Magazine. In an era awash with made-for-TV pseudo-adventure and tediously similar magazine titles, Avaunt will offer discerning portrayals of ground breaking contemporary expeditions with incisive and unconventional insights into the lives and narratives of pioneers past, present and future. It will celebrate the literature and art of adventure, the stories of the people that have mapped the boundaries of our physical world, and our knowledge of the collective potential of our species.

It will treat adventure in the widest possible sense, bringing into focus subjects as diverse as building your own tree house, planning your own expedition, experimenting with food, science and thought. Such stories have a unique power to captivate us all. Our planet’s mountain ranges, oceans, deserts, jungles and poles have inspired some of our richest literature and our most breath taking photography. Avaunt will document our desire to explore the unknown and the ways in which travel and adventure have always stirred the human soul. We will also cover traditional aspects of adventure, from outerwear clothing to comprehensive kit, top adventure destinations and a global events and news calendar. Featuring an extremely high calibre of editorial and photographic contributors, Avaunt will be unlike anything on the market right now, appealing to people interested not only in adventure, but the greater world around them.

Avaunt magazine is an award-winning journal dedicated to documenting and celebrating human endeavour, from the wildest, highest, deepest, coldest and hottest corners of the Earth and beyond. Each issue provides the chance to feel the adventure in your hands and read exclusive features. Featuring an extremely high calibre of editorial and photographic contributors, Avaunt magazine is unlike anything else on the market – appealing to those interested not only in global exploration, but also exploration of the mind. With expansive editorial range the magazine assembles a stellar cast of writers – the world’s most authoritative figures in science, philosophy, technology and literature – punctuated by accessible and timeless examples of adventurous fashion and some of the most pioneering photographers working today. 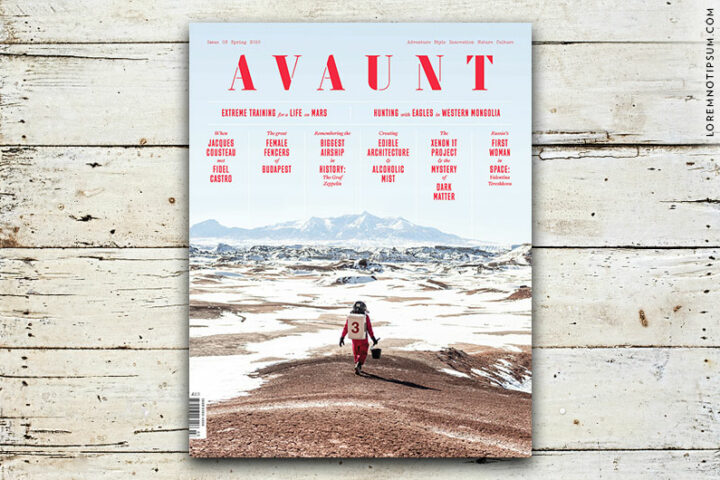