Disegno Magazine No. 19 is available now at LOREM (not Ipsum). Disegno is aimed at those who are hungry for updates on architecture, design and fashion.

Edward Barber and Jay Osgerby get to grips with ceramics; the interface design of the on-demand economy under scrutiny with UberEATS; nine tools for the contemporary alchemist; Kaat Debo and Alexandre Samson discuss curating the legacy of Martin Margiela; the effects of government on Singapore’s design policy; Konstantin Grcic reflects on moving to Berlin after 18 years in the same Munich studio; the mystery behind a series of lost sketches by the Swedish designer Thea Leonhard; design as a vector for community pride in Silo Studio’s Wealdstone leg; Eva Franch i Gilabert shares her plans for the directorship of London’s Architectural Association; a travelogue from São Paulo, by way of the Campana Brothers and a history of modernism; lessons from Amsterdam’s Vluchtmaat squat for asylum seekers; Aboubakar Fofana’s efforts to revive Mali’s indigo tradition; spectacle and its place in the theatrical design of David Rockwell; fighting the encroachment of state infrastructure in the Zad and NoTAV movements; and a series of stories about textiles with Jonathan Olivares. 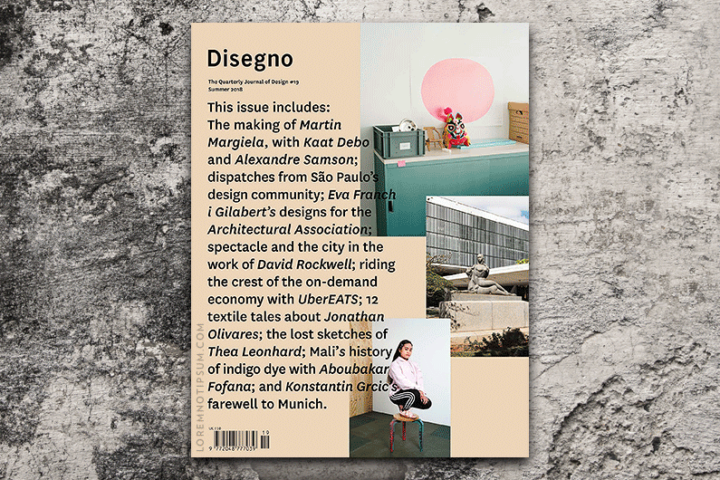