Gather Journal No. 10 (The Seven Deadly Sins Issue). We took a romp through the Seven Deadly Sins. You’ll find menus rooted in Lust, Gluttony, Greed, Wrath, and Envy; and concept chapters exposing a more tender side of Sloth and imagining the fanciful food aligned with Pride.

Gather Journal No. 10 (The Seven Deadly Sins Issue) is available now on loremnotipsum.com. For the Winter 2017 issue of Gather Journal, we took a romp through the Seven Deadly Sins. In Gather Journal No. 10 you’ll find menus rooted in Lust, Gluttony, Greed, Wrath, and Envy; and concept chapters exposing a more tender side of Sloth and imagining the fanciful food aligned with Pride. There are essays exploring what is the greatest food sin of our time and the symbiotic relationship between lust and gluttony, plus musings on everything from supersize culture to ordering envy to Liz Lemon.

Gather Journal is a bi-annual recipe-driven food magazine devoted not just to cooking and eating, but to what those acts inspire: the bringing of people together. You will find lushly imagined images from some of the country’s most esteemed food photographers and fun, insightful writing. Each issue is divided into chapters, much like a meal—amuse bouches, starters, mains, and desserts—along with regular special features, from studied examinations of ingredients to whimsical essays about memorable eating experiences. Gather Journal has been launched because of a shared love of food and cooking, and a desire to create a magazine with staying power on your bookshelf; one that you could return to again and again for inspiration.

Gluttony
Toads and vermin. In Dante’s inferno, those are what gluttons would be force-fed—a grim ending for a sin defined by excess. Under “G” for Gluttony in her Alphabet for Gourmets, M.F.K. Fisher fesses up to the pleasure that comes with stuffing oneself to the bursting point. “I pity anyone who has not permitted himself this sensual experience, if only to determine what his own private limitations are, and where gourmandism ends and gluttony begins,” she writes. In American culture (a land of Dorito- encrusted tacos and Louis C.K. bang-bangs) that line can be a blurry one. It’s a line that we traverse in our own gluttonous menu: an abundant fritto misto, poblanos engorged with cheesy potatoes, the over-the-top wonder that is a swineapple, and a bundt cake that’s sauced in every sense.

Greed
“Greed, for lack of a better word, is good. Greed is right. Greed works. Greed clarifies, cuts through, and captures the essence of the evolutionary spirit. Greed, in all of its forms—for life, for money, for love, knowledge—has marked the upward surge of mankind.” So went the speech by Gordon Gekko, played to smarmy perfec- tion by Michael Douglas in 1987’s Wall Street. Gekko was taking a page from bourgeois novelist Ayn Rand; greed was a cornerstone of her philosophy, which espoused the virtues of sel shness and pure capitalism. And the table has for centuries been a venue for expressions of greed, food and drink the medium for showing wealth, class, and social standing. Our greedy menu—stacks of silver dollar blini, an imam bayildi, a platter of sa ron-threaded deuà, and a baklava ecked with gold—is, in a word, good.

Sloth
Theologians traditionally see sloth, not as mere laziness, but as a sluggishness of the soul or deep indifference. But sometimes there’s beauty in the unhurried. as we learned from Aesop’s tortoise and hare, slow and steady can win the race.

Wrath
A 2011 study in The Journal of Experimental Social Psychology found that anger can in fact stoke creativity. Irritated subjects excelled at unstructured, out-of-the-box thinking and were able to muster more (and more original) ideas than their mellow counterparts. Mad genius, the expression goes. In Catholic catechism, anger becomes wrath, and, in turn, sinful, when there is vehemence behind the sentiment or it’s directed at an innocent. Think of wrath as anger at its most destructive. And in the kitchen, while wrath has the capacity to go awry (see Fatal Attraction and a certain cooked pet bunny), harnessing its feroc- ity can prove to be a virtue. Our wrath menu—smothered grape crostini, a pungent garlic soup, a spicy bucatini arrabbiata, and a sizzling skillet crumble—is designed to stir the proverbial pot.

Envy
While used interchangeably in our modern vernacular, envy and jealousy are not in fact one and the same: Envy is the desire for something someone else has, while jealousy is the fear of losing something you have. To wit: You see a friend eating a juicy burger, you’re envious; you see said friend sharing that burger with your betrothed, you’re jealous. en there’s schadenfreude, the German word for harm and joy—it’s taking pleasure in the pain of those we envy. It’s a feeling so common—just consider for a moment social media’s ability to stoke it—that a 2013 Princeton study likened it to a basic biological response. Should you not be able to enjoy our envy menu—gochujang coated baby corn, escargot-style cauli ower, a seitan bourguignon, and a layer cake in the senti- ment’s signature hue—it will elicit the very feeling that inspired it. 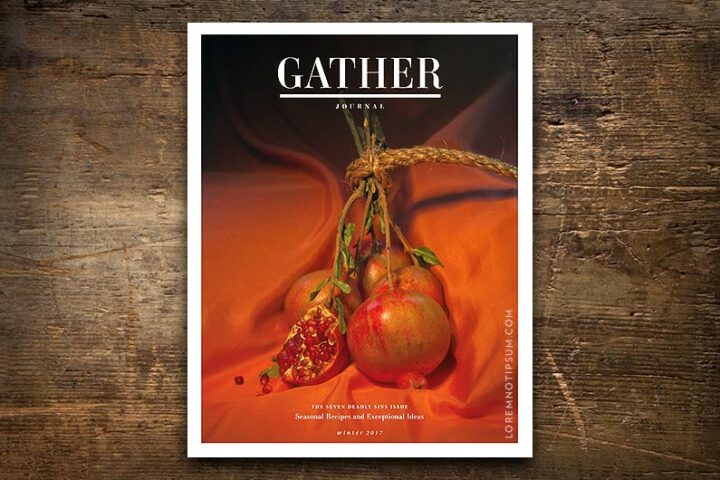