Gather Journal No. 9 is available now on loremnotipsum.com. The summer issue of Gather Journal turns back time to the 1970s. Chapters, and their accompanying menus, are arranged by genre: television, music, film, style, and one dedicated to David Bowie who is really a genre unto himself.

Gather Journal No. 9 is available now on loremnotipsum.com. The summer issue of Gather Journal turns back time to the 1970s. Chapters, and their accompanying menus, are arranged by genre: television, music, film, style, and one dedicated to David Bowie who is really a genre unto himself. There’s a sweet feature on the iconic hairstyles of the 1970s, and a story about the golden era of porn, complete with a sexy fruit centerfold (peel it out and pin it up). You’ll also find text musings on everything from the cookbooks that defined the decade to the crockpot, the genius of Norman Lear to the short-lived, but much-loved Viva magazine.

Gather Journal is a bi-annual recipe-driven food magazine devoted not just to cooking and eating, but to what those acts inspire: the bringing of people together. You will find lushly imagined images from some of the country’s most esteemed food photographers and fun, insightful writing. Each issue is divided into chapters, much like a meal—amuse bouches, starters, mains, and desserts—along with regular special features, from studied examinations of ingredients to whimsical essays about memorable eating experiences. Gather Journal has been launched because of a shared love of food and cooking, and a desire to create a magazine with staying power on your bookshelf; one that you could return to again and again for inspiration.

Style
Anything goes: the mantra for ’70s style. Feminism coincided with the emergence of trousers as the “dress for success” staple for working women, and environmentalism inspired a surge in crafty details like crochet. Fashion became a means of escape, as designers plundered exotic influences, and two music genres (disco, in all its hedonistic glory; and punk, brooding and dangerous) had a disparate but distinct impact. And film acted as both a conduit and harbinger for trends: The Great Gatsby and Cabaret spurred on ’20s and ’30s revivals; and Mahogany and Klute had the wardrobes of ’70s dreams. One common thread: a desire for individualism.The Me Decade! Our stylish dishes—a color-blocked crudité with turmeric dip; a draped uni pasta; a fish with far-flung details; and a syllabub with prickly meringue, designed with outliers in mind—distinguish themselves from the masses.

Film
The ’70s were the decade of the director as auteur and provocateur; perhaps the last era when the vision of luminaries like Cassavetes and Coppola and Scorsese, Woody Allen and Hal Ashby, Robert Altman and Terence Malick, trumped the agendas of studios. There is, in turn, a purity and humanity and grit to the films that emerged; they are often as untidy as people’s lives were then. Disillusionment was in the air, and this was reflected on-screen, where the outsider, the radical, the square peg was memorialized. Our menu—a delicate duo of tea sandwiches, a finely-chopped steak tartare, a prosciutto-swaddled branzino, an anise-laced, pineapple blackberry upside-down cake—pays tribute to a small serving of the decade’s films. Each one a breakthrough.

Music
Sound. That’s what began to evolve in the ’70s. The Grateful Dead built their behemoth Wall of Sound (70 tons of speakers, tweeters, and tube amps imagined by their LSD chemist Owsley Stanley); artists like Giorgio Moroder and Emerson, Lake & Palmer employed the new generation of Moog synthesizers to mind-bending effect; and Panasonic’s Technics SL-1200MK2 turntable decks opened up a world of playback possibilities for DJs. The ’70s would also birth entire genres—disco, punk, hip-hop, new wave—much of it consumed on vinyl in this pre-Walkman golden era of the album. Our music menu is made for repeat play: juicy sliders; an earthy salad of avocado and sprouts; summer vegetable ratatouille; a gelatin rainbow; and a funnel cake doused with powdered sugar.

Television
“It’s only an idiot box if an idiot is watching it.” True words from Archie Bunker, patriarch of Norman Lear’s trailblazing, boundary-busting sitcom All in the Family. TV’s first wave of significance (and radicalism) came in the ’70s. Comedian Carol Burnett became the first woman to host her own variety show (30 million people tuned in weekly); Mary Tyler Moore put a face to the growing number of women in the workforce; we got our first taste of reality TV with the Watergate trials; M.A.S.H went to Vietnam; Maude had an abortion; and landmark mini-series Roots cast sitcom dad Mr. Brady as a slave owner. It’s no wonder then that legions of people were staying in, to tune in. Our TV dinner—crunchy mushroom and onion dip; a far-out egg salad; “jiggled” chicken legs and thighs with lettuces and peas; and a tropical coconut cream pie—is also worth staying in for.

David Bowie
“Who is he? What is he? Where did he come from? Is he a creature of a foreign power? Man? Woman? Robot?,” asked Dick Cavett when he introduced David Bowie on a 1974 episode of his show. In an era when many yearned for a break from reality, Bowie was escapism incarnate. And for a generation looking on, Bowie’s exploration of gender fluidity (before that was even a term) and image would serve as reassurance of their own—each of his transformations reinforcing the hope that all of us could change too. When he passed this year, it was in his lyrics, written so many years ago, that we found solace. From Hunky Dory’s “Quicksand”: “Knowledge comes with death’s release. I’m not a prophet or a stone age man, just a mortal with potential of a superman. I’m living on.” His spirit lives on in our Bowie menu—a duo of high-concept oysters; a cool potato and “butter-milk” soup; a cabbage schnitzel hero; and a gleaming mound of mochi ice cream. 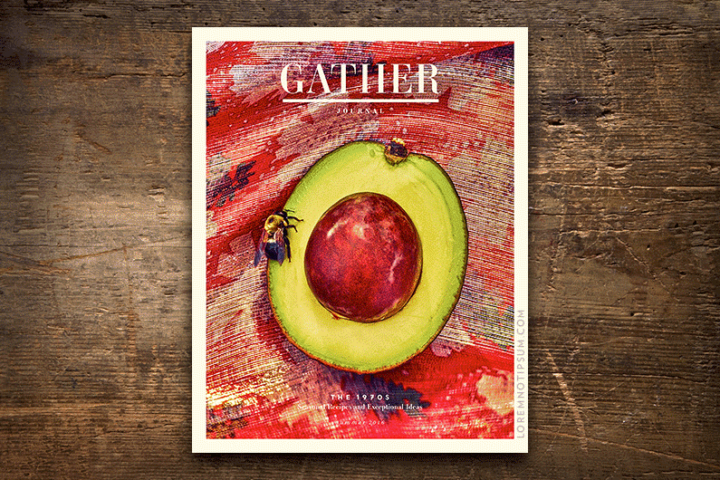