Ernest Journal Issue 9 is available now on loremnotipsum.com. Life on the Blasket Islands; our relationship with sea ice; living art and lost boulders with David Nash; whistling languages of the world; defensive measures hiding in plain sight; the bird men of Faroe; a score designed to play for a thousand years; finding wilderness on your doorstep.

Ernest Journal Issue 9 is available now on loremnotipsum.com. Life on the Blasket Islands; our relationship with sea ice; living art and lost boulders with David Nash; whistling languages of the world; defensive measures hiding in plain sight; the bird men of Faroe; a score designed to play for a thousand years; finding wilderness on your doorstep.

Ernest Journal is a biannual printed magazine for curious and adventurous gentlefolk. It is a guide for those who appreciate true craftsmanship and the care that goes into making, who are fascinated by curious histories and eccentric traditions and who care more for timeless style than trends. It is a periodical of substance created for folk who love to build fires, embark on road trips, camp under a canopy of stars and run full pelt into the sea. Ernest appeals to those of us who appreciate a craft gin cocktail as much as a hearty one-pot supper, who love the grain of wood and the smell of paper, who’d like to learn how fly fish, brew beer in their shed and name all the constellations of the northern hemisphere. It is for people who like to whittle. Ernest Journal is brought to you by a passionate troupe of writers, editors and designers who love tactile design, show-stopping photography and slow journalism.

INVENTORY
The curious world of seaweed; silk escape and evasion maps; a history of chronocyclegraphs; sea journals through the ages; whistling languages of the world; Welsh slate mine art; the human microbiome reimagined as a coral reef; types of mirage; woolly buggers and booby nymphs; crown shyness; the story of pigment and boots for big hills.

BREAKING THROUGH
We have a childlike fascination with ice in its many forms. But onboard the icebreaker Otso, crashing through sea ice off the coast of Finland, Horatio Clare forges a different relationship with ice, an unpredictable, ever-moving frozen wasteland that is disappearing before our eyes. Illustrations: Owen D. Pomery.

LIVING WORKS
Hidden in a corner of woodland in North Wales is a circle of ash trees, which sculptor and land artist David Nash has fashioned into a living dome over more than 40 years. Planted as a beacon of hope, the artwork is facing an uncertain future. Steph Wetherell heads to the woods to learn more. Photos: Alex Poulter.

FINDING WILDERNESS
In 1991 John Hayward published a book called Dartmoor 365: An Exploration of Every One of the 365 Square Miles in the Dartmoor National Park, which split this landscape of wild moors and granite peaks into 365 individual grid squares, cataloguing the archaeology, mythology and curious features in each place. One grid square is particularly intriguing: G7. Here the author found nothing of note; he simply named it ‘wilderness’. Now, that’s just too tempting right? This is the story of three people who set out to find that wilderness. Words: Charles Fanshawe. Photos: Jim Marsden.

DEFENSIVE MEASURES
“Some years ago my village fire brigade got a call from a local farmer. He was curious about a strange steel hatch in one of his fields, perched on the cliffs above the North Sea. The firemen duly lifted it and the watch commander descended the ladder to find himself in an old RAF listening station from the Second World War. It was still full of equipment, as if they’d just got up and left one day. The firemen called the MOD and were told ‘Oh yes, we know that’s there – don’t worry about it.’“Joly Braime investigates British relics of war hiding in plain sight. Illustrations: Harry Sussams.

BLASKET ISLANDS
An archipelago of six inaccessible and strategically unimportant islands, the Blaskets rise as mountains directly from the Atlantic off the west coast of Ireland. Dan Cook introduces us to these islands, which were once the most westerly settlement in Europe, now a beautiful yet bleak reminder of lives eked out of the harsh landscapes. Words and photos: Dan Cook.

A SCORE FOR A THOUSAND YEARS
Trinity Bouy Warf is set against the Thames and almost detached from the land by the curves of the River Lea and East India Dock Basin. Used in the 1800s by scientists, including Michael Faraday, to develop the beacons that mapped the nation’s coastline, its experimental lighthouse now houses Longplayer, a piece of music composed by The Pogues’ Jem Finer that’s set to play for a thousand years. Words: Joseph Delves.

JENNIFER & THE SHERPAS
In 1952, a year before the conquest of Everest, a young woman travelled with a British Expedition to the Himalayas. The remarkable account of her visit to the Sherpas captures a time before Nepal was opened to the West. Words: Matthew Jones. Illustrations: Jessica Smith.

A ROAD TO UNDERSTANDING
Hitchhiking isn’t known as a particularly safe or reliable way to travel, but is it as edgy and as action-packed as the stories profess? Samuel Firman, who thumbed a lift from Norfolk to China, shines a light on months spent looking hopeful by the roadside. Illustrations: Owen Gent. 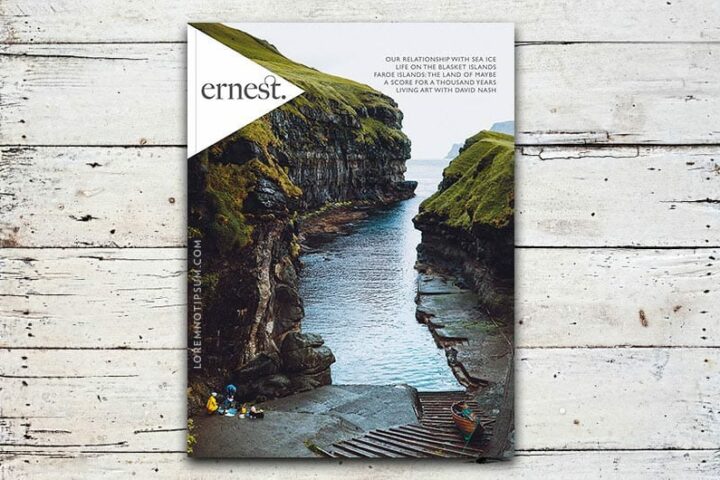