Flaneur Magazine Issue 3 is out now: Rue Bernard, Montreal. The third, and first international issue, depicts Rue Bernard in Montreal, Canada. Though created in mostly snowy and freezing weather conditions the issue is a vibrant, vivacious and dynamic hybrid of stories and people mirroring the clashes of identities that is Canada.

Flaneur Magazine Issue 3 is avilable now on loremnotipsum.com. For the reoccurring »Photographic Trips« sculptors Michel de Broin and Jonathan Villeneuve capture Rue Bernard through their eyes using a disposable camera each. With a collection of essays depicting Canada as a land of fragmented identities the writers David Homel, Josip Novakovich, Jean-Sébastien Larouche and Andrew Zadel beautifully reinforce Flaneur’s concept of being a literary magazine. Montreal choreographer and dancer Frédérick Gravel stages an intervention on the street with a group of dancers playing not only with the street’s void but with the meaning of dance in a static format. Writer Caia Hagel and editor Grashina Gabelmann teamed up with illustrator Mivil Deschênes to pay homage to Rue Bernard’s roller derby girls and Montreal’s love to graphic novels with the comic »The Rolling Supernovas«, which is presented in a comic book format. Writer Tim Woods Palma finds himself on the street in the middle of the night in a peculiar state of mind. He writes snippets of prose, collects things off the street and records conversations he has with others including his mother. This confusion of information and materials is presented cleverly in an experimental format.

Photographer Tim Georgeson met and followed two young boys in love against all odds. Their love story and philosophies are recorded by Caia Hagel alongside the images. And there’s much more: the shops and homes of the people on Rue Bernard, inner conversations visualized through 3D renderings, a dreamy food shoot and an architectural walk down the street.

Flaneur magazine is an awarded, nomadic, independent magazine focussing on one street per issue. The magazine embraces the street’s complexity, its layers and fragmented nature with a literary approach. The content of the magazine is produced with and for Flaneur by artists of all disciplines while the team spends two months on location. It is made using a collaborative, impulsive and unconventional approach. The magazine attempts to use a single microcosm to tell universal stories. 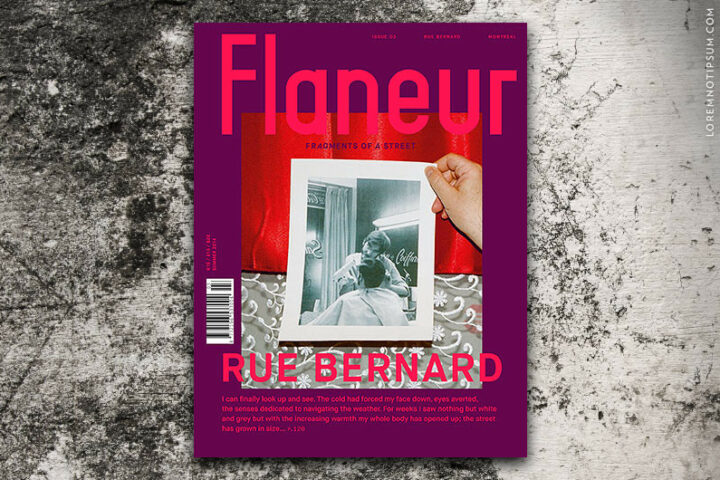