Flaneur Magazine Issue 6 is available now and featuring the Boulevard Ring in Moscow. Diverging from the principle of focussing on one street, we let ourselves succumb to Moscow’s underlying cosmological blueprint: the city is made up of orbits.

Flaneur Magazine Issue 6 is available now on loremnotipsum.com and featuring the Boulevard Ring in Moscow. Diverging from the principle of focussing on one street, we let ourselves succumb to Moscow’s underlying cosmological blueprint: the city is made up of orbits. The Boulevard Ring is the first orbit and on it we chose five bubbles that encircle the Kremlin. These bubbles are not just places – they are constellations, principles, motifs for our exploration. They are focal points that we can return to, when we get lost, thus they allow us to get lost. Their boundaries are as blurry as their inner centre. But for now, we choose to believe in them – we choose to let them take us.

Flaneur magazine is an awarded, nomadic, independent magazine focussing on one street per issue. The magazine embraces the street’s complexity, its layers and fragmented nature with a literary approach. The content of the magazine is produced with and for Flaneur by artists of all disciplines while the team spends two months on location. It is made using a collaborative, impulsive and unconventional approach. The magazine attempts to use a single microcosm to tell universal stories.

Chapter 1
Arbatskaya Square – Kirill Savchenkov, uses the skateboard as a tool to explore the cityscape as a training zone for future survival techniques. In his essay »Tactical Behaviours« editor-in-chief Fabian Saul turns to the concept of tactical behaviours to decode his meanderings.

Chapter 2
Pushkinskaya Square – Author Ksenia Golubovich revives her childhood memories by returning to her former communal home. A team of people collected a wealth of information of those using the Boulevard Ring to paint a vivid picture of the transient life on the Ring. Oxana Rudschenko tells stories of her life on Pushkinskaya Square through the twilight of the Soviet Era.

Chapter 3
Chistye Prudy – The photographer Anna Skladmann visits her grandmother’s house in Germany that is full of artifacts of her former life in her native Moscow. Pavel Pepperstein introduces us, with the grace of one who has seen everything, to his home on Chistye Prudy, where he grew up with his father, the artist Viktor Pivovarov. Marinika Sadgyan uses social media content to reconstruct a civilian attempt to save a Constructivist building from being demolished. Photographer Stas Galaktionov explores the underground vibes of one of the last remaining squats in the neighbourhood.

Chapter 4
Moskva Waters – Editor-in-chief Grashina Gabelmann uses her watery dreams and a challenging cat to navigate through a psycho-geographical, introverted piece. The artist Judith Sönnicken considers the mental architecture of disappearing and reappearing structures. Her considerations take on the form of a fictional museum and its permanent collection, for which she is a curator and artist. In the piece »Two Hours In«, a bar on Chistoprudny Boulevard provides the setting for a free-wheeling conversation about five-year-olds watching Soviet-era parades on YouTube, Lacan and the question of whether or not you can talk about sex while having it.

Chapter 5
Prospects – The last chapter considers the future as much as the possible futures of the past, the crossroads that haven’t been taken, through a collection of poems, short stories and visuals. 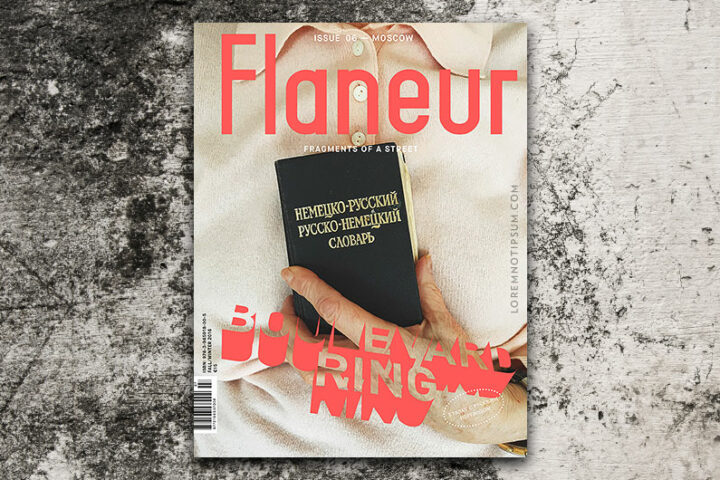