KAJET Journal No. 2 (on Utopias)

KAJET Journal No. 2 (on Utopias) is available now. KAJET Journal is a journal of Eastern European encounters. In the case of Eastern Europe, it is the very fluid history of the region that makes it the perfect site for critically delving into its troubled relationship with the notion of utopia.

KAJET Journal No. 2 (on Utopias) is available now on loremnotipsum.com. In the case of Eastern Europe, it is the very fluid history of the region that makes it the perfect site for critically delving into its troubled relationship with the notion of utopia. That is why, especially here, we must continue to juxtapose the current desolate order with a well-established ideal. Focusing on revolts and rebels, on insurgency and visionaries, on the speculative and idealistic, the second issue of KAJET Journal seeks to decipher and resurface utopian alternatives. At a time when the guarantee of liberal Westernism has reached a certain point of saturation in Eastern Europe, we’ve come to realise that we have been tricked into distrusting the existence of an alternative modernity, dooming ourselves to decades of stagnating, catching up, and forever emerging. In fact, utopia itself has become utopian—a forsaken relic of the past, a symbol of failure.

But storming palaces and booing speeches bear no meaning any longer, for these counter-hegemonic tactics have become largely ineffectual. We ultimately need to replace these excessive sentiments of powerlessness and disorientation with a new futurology of the East. We need to proclaim the end of the end of history, to reclaim the future, and to start building. Eventually, we end up asking ourselves: Is there room for utopia after utopia?“

KAJET Journal is developed, designed and printed in Bucharest, Romania. It is a journal of Eastern European encounters that seeks to be more than just a mere signal from the periphery—essentially, to move beyond a purely anecdotal understanding of Eastern Europe. Inside Eastern Europe — an urgent and topical subject matter that needs to be actively represented through the medium of independent publishing. In our attempts to approach scholarly interests with an informal overtone, we provide a platform for academics to co-exist with artists; in this way, KAJET Journal becomes an alternative space where Eastern European encounters are brought to the fore for the steady reader and for the culturally inquisitive Flâneur and Flâneuse.

I. Archaeologies of the Future

III. Architecture as a Machine for Living

Jeannette Petrik—Teknivals as Prototypes for Utopian Imagination (illustration: Ana Maria Dudu) without appeal—Arcadia as a Surface to Throw Personal Stones Into
Katarzyna Wąsowska—Atlantidology
Cosmin Nicolae—Songs and Laments of Yung Yue Nourescu (illustrations: Cristi Iacob)
Griet Menschaert—Leave Me Alone: A Flagline to Protect You

Details: KAJET Journal No. 2 (on Utopias) 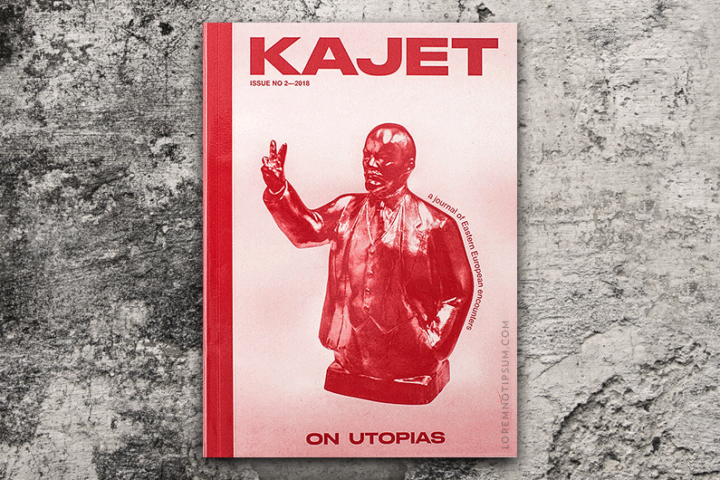