Staple Magazine Issue 2 is available now on loremnotipsum.com. Confronting the binary relationship between subjectivity and objecthood, the 21 articles featured in this issue in one way or another redistributes these established roles.

Staple Magazine Issue 2 is available now on loremnotipsum.com. Confronting the binary relationship between subjectivity and objecthood, the 21 articles featured in this issue in one way or another redistributes these established roles. Objects of Delight is an investigation of the pleasure humans derive from our interactions with the objects that populate our environment. Our material world is largely determined by the re/production and consumption of objects. Their physical existence contribute greatly to the way we inhabit spaces and how we acquaint ourselves with the world. Regardless of whether it is a question of aesthetic, cognitive judgement, functionality, fetishism or sentiment, in the second issue of STAPLE, we ask — what causes an inanimate thing to give its onlooker, wearer, user, receiver or creator a sense of gratification?

Back to serve you a major glow up, Issue 02 braves a bold front as part of a new art direction by LIBA Studio, that bleeds through the pages. Within an editorial capacity, a capacious theme was selected, allowing for inventive reconstructions as well as explorations of the mundane. Favouring contributions with a criticality, we seek to dissect the engagements between the living and the inanimate. In an essay titled ‘Defamiliarising the Architectural Object’, Rocky Howe explores the possibilities of interpreting everyday architectural objects, such as the fence in different, more encompassing ways, than just a divider.

The ‘object’ here is not restricted to the physical or the material. This is most evidently exemplified in Soft Happiness, a mixture between prose and poetry by Lara Conrad, as well as Object of Desire, a photography series by Nicole Ngai. Lara touches on the 24/7 performativity of functioning like the right girl, the right woman; while Nicole addresses the portrayal of female bodies, within practices of the visual, as objects to be gazed upon, taking inspiration from John Berger’s Ways of Seeing. Despite their distinctive approaches, the two works are similarly centred on the duality of the body, as both subject and object.

Staple magazine is the publication for the curious. It is a compilation of potentially precarious ideas that set out to challenge common thought on contemporary topics. The magazine is based in Singapore with a team that is scattered across London, Glasgow and Singapore. Staple magazine is a new socio-cultural publication, published bi-annually.

Available for preview in the image gallery above are four hand-picked articles:

An essay on the the social life of clothings by Social Anthropology undergraduate Mohammed Zaahidur Rahman, titled Wavey Garms: Buying Sentimentality, Wearing Sociality with photographs supplemented by Ezekiel Santos. An interview with Cesare Fabbri, on his debut photobook, The Flying Carpet, published by MACK, where we spoke about anthropomorphic quality of the photographed object – both real and imagined. A series of found stereoscope slides accompanied by a self-written poem titled Broken Refrains by Singaporean photographer Jonathan Liu. A photography series titled The Secret Lives of Fruits and Vegetables, by Maciek Jasik, which aims to reintroduce the mystical qualities once associated with edible plant life 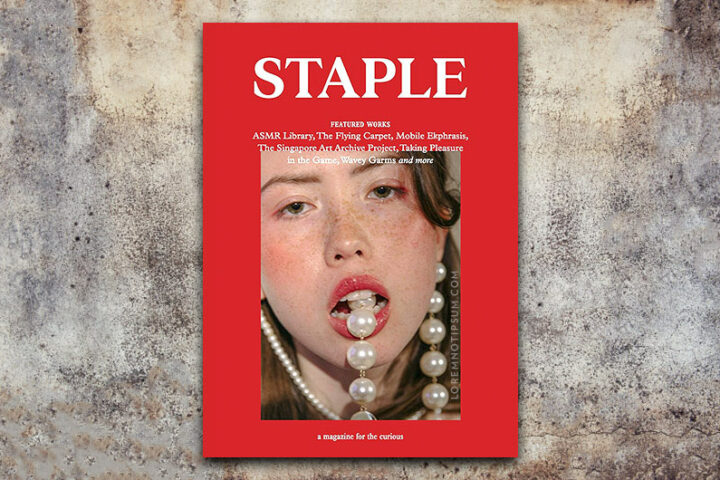