Magazine B Issue 34 (Leica) is here. Leica made photography a part of everyday life when they introduced the first 35 mm camera in 1914. Leica’s century-old tradition of quality highlights the true essence of what a camera is and sets the company apart from the powerful Japanese DSLR brands.

Magazine B Issue 34 (Leica) is available now at LOREM (not Ipsum). From its origins as a microscope maker, Leica made photography a part of everyday life when they introduced the first 35 mm camera in 1914. Leica’s century-old tradition of quality cameras and lenses highlights the true essence of what a camera is and sets the company apart from the powerful Japanese DSLR brands. Discover Magazine B Issue 34 (Leica).

My parents used to keep a film camera in the wardrobe, like it was one of their most treasured possessions. I think it was a Pentax. My father was very deliberate in the photos he took with it, and I’m reminded of that unique-looking manual focus camera whenever I look at those photos. Perhaps because I wasn’t allowed to touch that camera, I really enjoyed photography class when I was in college. Every time I advanced the film, I would imagine how the shot came out, but it only existed in my mind until I developed the film. I would work on the film with great anticipation, surrounded by the sharp chemical scent of the darkroom, and I was truly delighted when the images would emerge on the paper. I still distinctly remember that feeling.

The moments when I experienced the transition from the warmth of analog to digital remain some of the most special memories of my college days. Just as word processors and printers replaced handwritten reports, the emergence of digital cameras placed film cameras firmly in the past. It’s been two decades since I graduated from college, and in that time, I’ve seen various digital cameras. I found myself, however, approaching photography more superficially as the act of taking a picture became easier. At one point, the thousands of easily accessible photo and image files stored on my smartphone and computer became an overwhelming burden.

I had become more obsessed with camera products than photography itself. And then I encountered the Leica M Monochrom. It was an opportunity to reconsider my thinking. The manual camera produced only black and white images using lenses made specifically for the Leica M series. It reignited my old passion for photography, and I’ve maintained my new interest in the field for over two years. I think an image expressed only in black and white leaves a meaningful impression because human vision tends to perceive brightness before color. The M Monochrom is a brilliantly eyeopening creation based on that principle.

Magazine B Issue 34 (Leica) is out now. This month, we talk about German camera brand Leica. It’s a special brand making expensive compact cameras sought after by all photographers, amateur and professional. With the decline of film and the rise of digital, many businesses in the photography industry, including Leica, found themselves facing significant challenges. Leica, however, adopted Panasonic’s digital technology to introduce new products, and has continually worked to strengthen its presence in the digital market. The value of the Leica brand seemed to have been proved when Leica and Panasonic launched identical cameras, differentiated only by slightly different logos and designs, and more people went for the Leica. It must have taken an extraordinary effort for the camera brand that invented the 35 mm compact and introduced photography to the general public to maintain its reputation in the digital segment. Discover Magazine B Issue 34 (Leica).

INTO THE SHOPS
Scenes from Leica stores around the world

Tools
The value of Leicas as tools

Stories
The philosophies and attitudes of 10 photographers

The Field
Photographers capturing photos in the field

FIGURES
Significant figures in the history of Leica 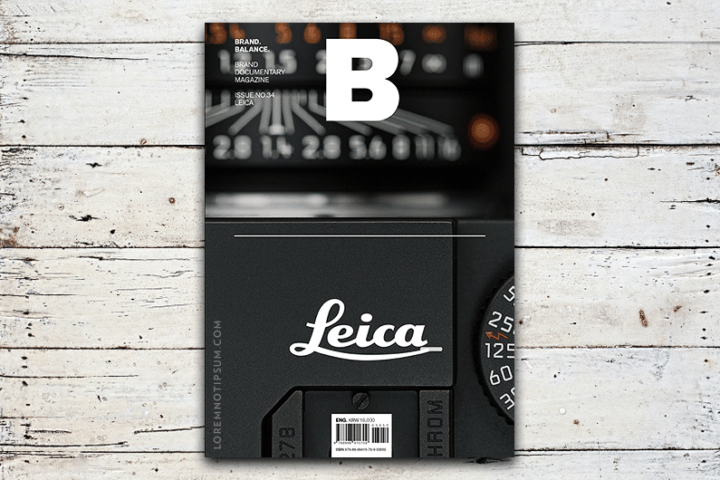